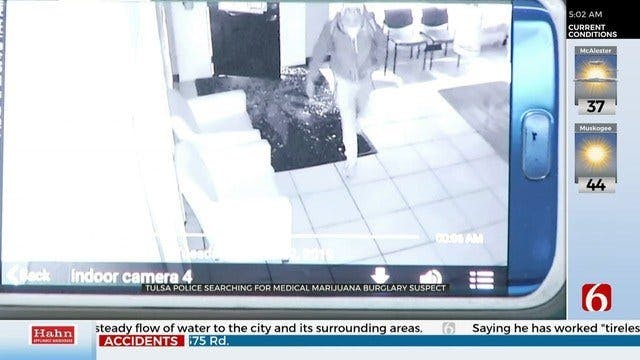 Detectives are hoping surveillance video from inside a medical marijuana dispensary near 11th and Knoxville will help them identify a man involved in an overnight burglary Tuesday.

The owners of Tulsa Cannabis Company say they woke up to an phone alert about a break in at their store. They say they logged into the security system and could communicate through the phone to the speakers inside the store.

The owners of the store said they were yelling at the burglar through the speaker system, which caused him to leave; however, he came back just minutes later.

"After he seen the coast is clear and he came and helped himself to what he wanted," said owner Carlos Ocampo.

When officers got to the store, they had the K-9 officer and helicopter out looking for the man, but they were not able to find him.

Officers say the man got away with a few edibles and other small items, but they're hoping the surveillance video will lead them to the burglar.

If you know anything that could help, call Crime Stoppers at 918-596-COPS.