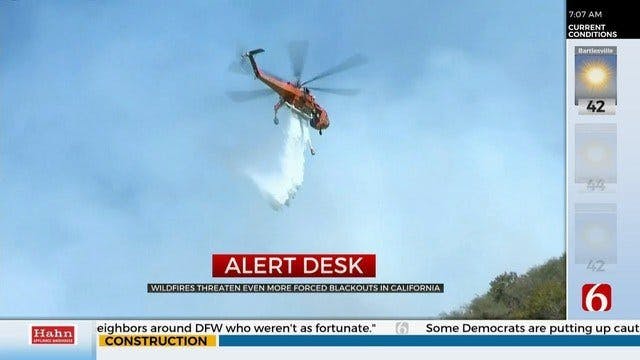 Less than two weeks after blacking out much of Northern California, wildfires are threatening even more forced blackouts in the state.

A huge portion of California is under high fire risk with windy weather and rising temperatures.

On Monday, several homes were damaged in San Bernadino, California in what's being called the Little Mountain fire.

And just 80 miles away in Pacific Palisades another fire nearly wiped out several homes. But thanks to helicopters that dropped water into the night and firefighters on the ground, no homes were damaged.

Less than two weeks after blacking out much of Northern California, the state's largest utility--Pacific Gas and Electric-- is warning that dangerous fire weather could prompt it to shut off power again, and this time to about half a million people.

The company says any blackouts would last at least 48 hours.